Billy Bragg has played a big part in my life. He was there, when, as a teenager I struggled with the images of striking miners and Exocet Missiles, he was there in my twenties when I wrestled with an uncaring Tory government and Poll Tax riots, he was there through my thirties as I came to terms with yet more wars and New Labour, and now, in my forties, he’s more relevant than ever.

Billy Bragg didn’t turn me into a socialist, he didn’t make me a left wing agitator or communist sympathiser, he didn’t make me go out and attack policemen or set fire to images of she-devils, none of these things, he just made me realise that I wasn’t alone. 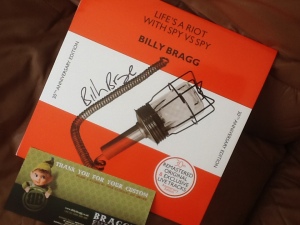 The other side of the lyric sheet.

Growing up in the eighties, despite what current nostalgia will have you believe, was grim. The working class were encouraged to hate their neighbours, to look down on people in need and to worship at the altar of avarice. We were all encouraged to become middle-class, to own our own homes and to own our own utility companies, even if it meant buying something that already belonged to us. The north of the UK all but closed down, whilst Yuppies paraded around the South so pumped up with greed that they didn’t even bother to hide it. The fallout from such doctrines can be seen everywhere today, the world teeters upon the brink of financial collapse and the media blames everyone bar the bankers that brought this down upon us.

As a fourteen year old boy I looked upon this with confusion and a great amount of shock. There was no guidance from my parents, who bought into this ‘new dawn’ wholeheartedly, buying the tiny council house that they lived in and quoting the Sun’s headlines as if they were the words of God. I was alone. And then I saw Billy Bragg.

However, it may have been the resonant and powerful lyrics of To Have And Have Not that first drew me to Billy Bragg, a brilliant call to arms for the millions of kids chucked on the scrap heap by the then Tory government, but it was the love songs that kept me. Yes, love songs.

For many, Billy Bragg is seen as a loud mouth lefty who’s spark was dampened as soon as New Labour came to power; they couldn’t be more wrong. Over the years he has given us some of the finest love songs ever committed to vinyl. Bitter sweet tales of unrequited love, of tormented anguish and of course the truth about pain. In fact my first encounter with the word unrequited was when I played Saturday Boy off of the Brewing Up album, heartache can be educational.

So why this sudden outpouring of man-love for Mr Bragg? Well yesterday I received my 30th anniversary reissue of that first Bragg album Life’s A Riot With Spy VS Spy on glorious vinyl and Mr Bragg’s signature on the front cover. This was the album that so electrified me as a young man, this was the album that told me I wasn’t alone and, most importantly, the album that let me know it was ok to be in love and to feel shit.

I’ve got all of Bragg’s albums, up to Don’t Try This At Home, on vinyl, so why buy the reissue? The reissue comes with the remastered album on side one, still played at 45rpm and a live version of the album on side two recorded at Union Chapel in London on June 5th 2013. You also get a free download of the album so that you can listen to it on the go. But I haven’t really answered my own question. If I’m honest I think I bought it to say thank you and also to be a bit of a completist. If you’ve got the original do you really need this, well no. The live tracks are good, very good, as Mr Bragg always is, but not essential. If you haven’t got the original, or have since decluttered and let it go, well now’s the time to put that right and to grab a copy of this excellent debut album.

As many young men before me, and since, I was excited by the idea of picking up a guitar and making music, of forming a band and changing the world. Naive? Yes. Bloody good fun? Oh yes! I struggled with tuning and chord formation, posed in the mirror and scribbled down substandard sixth-form poetry and got to the point of giving up until I heard Billy. Here was one man, armed with nothing more than a guitar that looked like it’d been built from the junk you’d find in a skip, and a gob full of the most wondrous words. The music was angry, jagged, aggressive and the words powerful, precise, beautiful. I continued with the guitar, formed a few bands, played a few gigs, wrote some songs, had a lot of fun. I’d like to think that he inspired others too, the obvious one being Frank Turner but what about people like Simple Kid, Badly Drawn Boy, Jim Noir and the stratospheric Jake Bugg? All these guys have started out on their own with nothing more than a guitar and a headful of songs.

So, I’d like to say thank you for the songs Billy and where the bloody hell did those thirty years go?