I’ve not posted since the 30th of June. What did I miss?

You’ve probably guessed this but I’ve been busy.

Busy writing, working and generally trying to distract myself from the apocalypse but now I’m back. I’ve some news later about a short story that’s due to be published but for now I just want to tell you about a little thing I was involved with as part of the Birmingham Literature Festival.

Hear Buddy Here is an online writers meet up and one of the meetings was recorded as part of the festival and is now available online. You can view it here on the Festival site, or here on YouTube, or it’s there, below, just click on it. This snippet features five writers: Michael Toolan, Kate Innes, me, Santoshi Mann and Dan Shooter. For those of you who need to know such things, I appear around the 20 minute mark reading an extract from Weekenders and go on to talk about writing and the life of stories. Enjoy.

I’m very pleased to announce, somewhat late in the day, that my short story, Cuckoo, is now available online at The Mechanics Institute Review for you to read and enjoy.

Click on this link, have a read and take your mind off of the Covid-19 chaos for twenty minutes or so.

Hmm, let’s start by looking back.

My last post was concerning the huge boost to arts funding that would become a reality after Labour won the 2019 general election – well, that never happened. A bit of a shock if I’m honest. I’m a bit of an optimist, and I was convinced that Labour’s argument couldn’t fail, but it did, so what does the future hold? Well, not a lot if you’re going to sit around waiting for someone to do things for you. It seems that the right-wing have public opinion sown up, thanks to their super-rich media-moguls, but that doesn’t mean we can’ bring about change in our own lives – just look at the huge impact Greta Thunberg has had upon the world simply by going on strike!

We need to make things happen ourselves – don’t worry, this isn’t the part where I hurl internet platitudes at you, ‘Be the lobster you want to be!’ So what am I doing, apart from displaying my fondness for the word lobster? A few things. Me and a talented friend are putting together a book. We’re both fed up of being at the mercy of literary gatekeepers and decided we’d do it ourselves, but this isn’t some self-publishing vanity project – to be fair, much of the self-publishing world isn’t. This will be a labour of love to a part of our city that means a lot to both of us. We’ll be documenting in words, both factual and fictional, and images, a part of this glorious place we live in that could soon be no more. Some of you may even buy it – now there’s a thought.

I continue to scratch away with my own writing. I will have a short story out this year in a Birmingham themed collection from Dostoyevsky Wannabe, and I continue to send words out to potential publishers – chin up, no man’s put me down yet…

There are opportunities out there for creative types like me and I shall be doing my best to snag a few of them. I enjoy working with others, and unlocking other people’s potential, so I’ll be looking out for more stuff like that as well as stand alone projects. A few are already on my radar – it must be this 2020 vision.

I’ve also agreed to climb Snowden in the dark – climbing it in daylight is too easy! That last statement is something I’d never say. I’ll post some more info regarding this soon.

January has nearly gone and I’ve not done half as much as I intended to. I will do more in February. See you there.

It’s the perfect supplement to the Barry Flanagan exhibition that is currently on at the Ikon Gallery in Birmingham. Yes, you’ve guessed, it’s my short story, Ikon. Simply get the Overhear App, visit the Ikon Gallery, and download an audio file of me reading the story at the Ikon. Sorted.

I received my copy of Songs For The Elephant Man the other day and its a beauty. This great collection of short stories is yours for mere pounds – £8.99 for eighteen stories!

You can order this from any good bookshop or buy it direct from the publisher’s website by clicking here.

As always, let me know what you think.

My story, Electricity, will be published shortly as part of this wonderful anthology from Mantle Lane Press.

It’s a excellent title for the collection as all the stories are about or misfits. However, thanks to Matt Berry’s Year of the Rabbit on Channel 4 I can now only ever see the Elephant Man as a camp thespian on the make.

You have two chances to hear me read from my latest book, Submerged, next week.

First up is City Voices in Wolverhampton. It all starts at 7:30 at The Lighthouse a few minutes walk from the train and bus stations. City Voices is one of the Midlands’ finest spoken word evenings and never fails to delight with its range and quality of work on offer. I will be selling books.

Secondly, will be the official Birmingham launch of Submerged, and it’s going to be a corker, but don’t just take my word for it check out the line-up here.

The keen eyed of you have noticed that Submerged is now out. That means you can go down to your local bookshop, check out the Mantle Lane online store, or search your favourite online retailer and get yourselves a copy.

Those of you who are more outgoing can meet me and some bloody excellent writers for an evening of stories and booze when we launch Submerged on May 15th at The Birmingham Whisky Club.

We’d all love to see you there.

The flyer says it all, but I can’t stress enough how great the other writers are and how wonderful an evening it promises to be. If you like fiction you’re in for a real treat.

There are easy train and tram links to the Jewellery Quarter station from which we are a few minutes walking distance away.

You can also walk from the city centre, which will take you approximately 20-30 minutes.

There is on street pay & display parking available which is free from 6pm. Or the Jewellery Quarter parking garage is a short distance from us if that is your preference.

Another quick one – I just don’t have the time at the moment. This is a view of the south end of Coniston in the Lake District. It’s all fibre tipped pen and is actually black on white paper. The image is a sepia brown due to me taking the pic on my phone for speed. 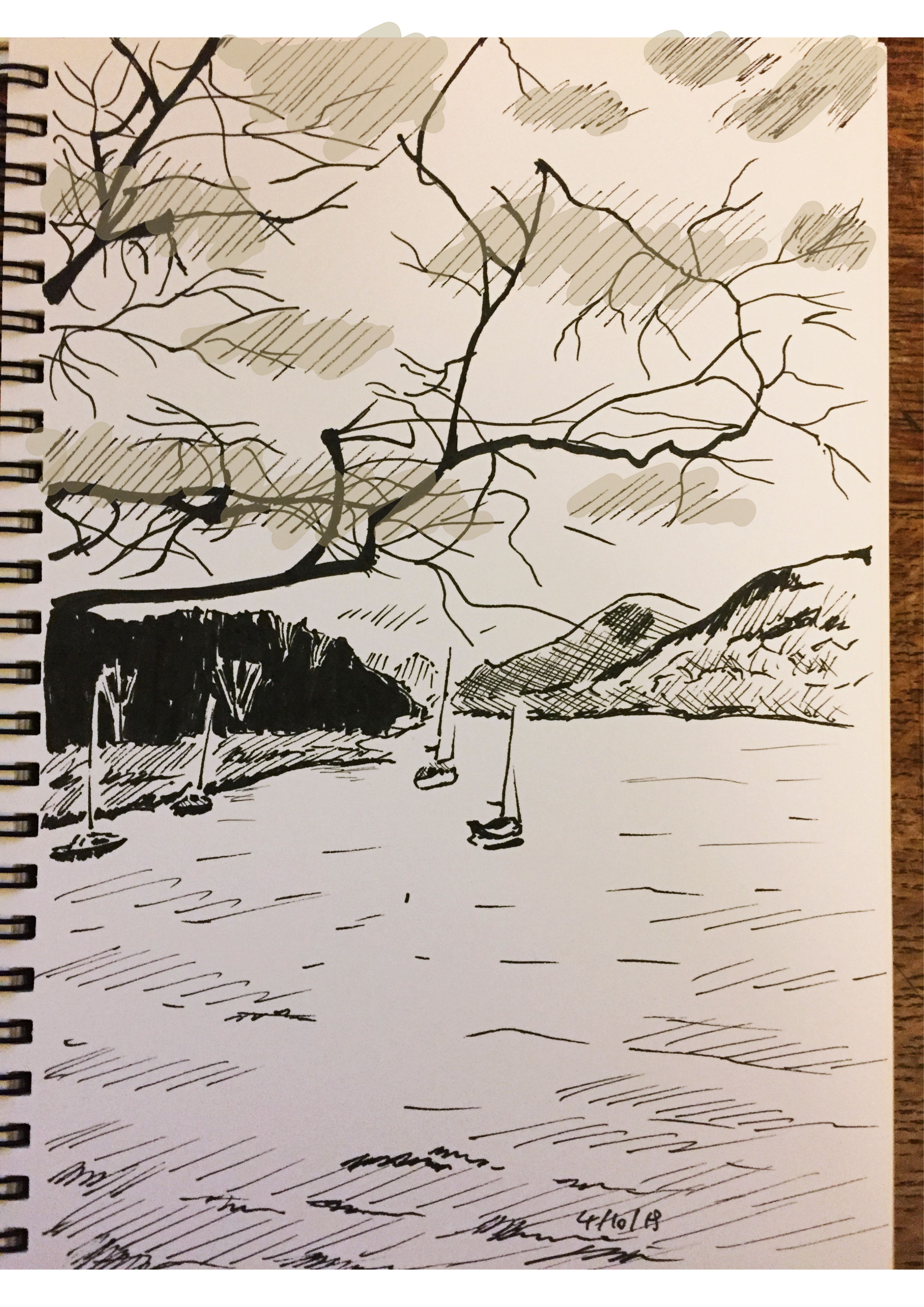 I did do a little tinkering in Affinity Photo to add the sepia splashes of cloud.

I’m hoping to get a bit of time at the weekend to do some longer drawing and some writing. That will hopefully be on Sunday once I’ve got my reading at Birmingham Literature Festival out of the way and finished working with my young writers group on the Saturday. I’ve set Saturday evening aside for watching crap with the family and drinking beer.

If you’re in Birmingham this Saturday morning (October 6th) come along to Birmingham REP, the Mezzanine, and hear some great stories from a bunch of wonderful writers. Hell, you could even buy some books.

I’ll be reading a short story, along with a host of excellent writers, and selling some books as part of the Room 204 meet up. It kicks off at 10:00 am this Saturday, October the 6th, at the Mezzanine, Birmingham REP. 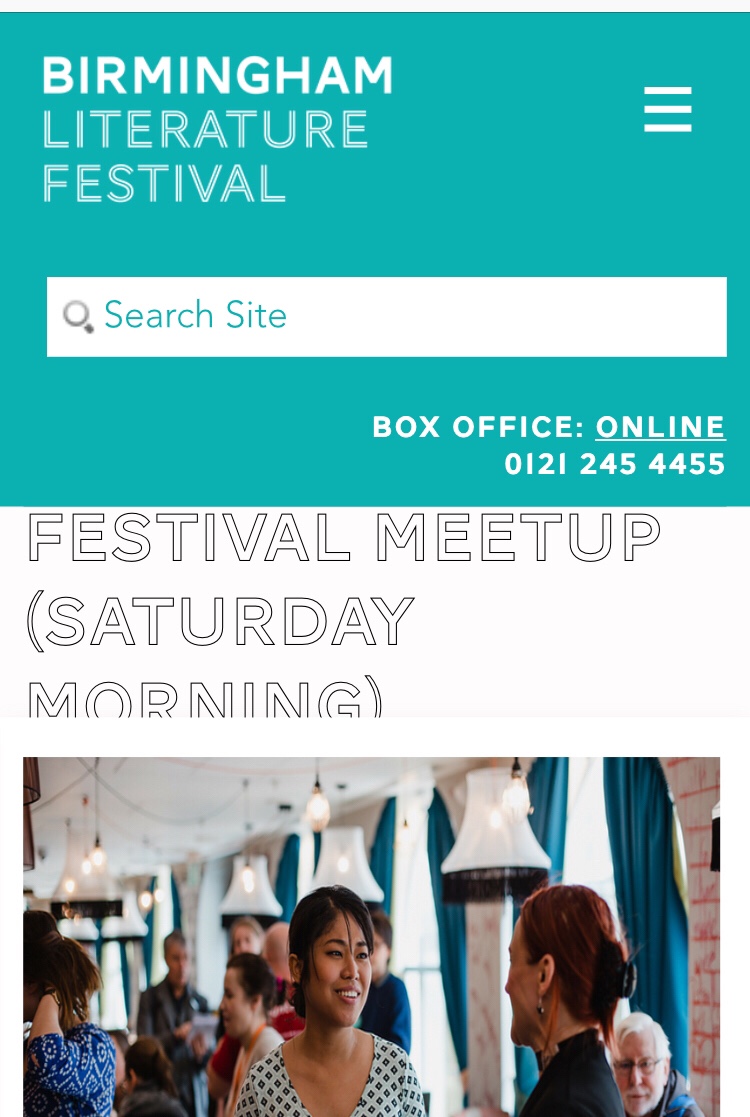